Infection-related acute kidney injury on the rise in India

Even as the world health day this year is dedicated to reducing the scourge of vector-borne diseases, here is a fact that will shock you - infections are responsible for a substantial portion of community Acquired Kidney Injury (AKI) in India.

While the commonly implicated conditions include malaria, leptospirosis, dengue, enteric fever, viral and bacterial infections, little is known about scrub typhus caused by the micro-organism rickettsia and transmitted to humans by mites which is endemic in Asia with an estimated one million cases occurring annually.

With the line between communicable and non-communicable diseases increasingly getting blurred, The George Institute for Global Health India has this World Health Day turned the spotlight of attention to scrub typhus which is highly under-diagnosed and under-reported cause of hospitalization in India. The World Health Organisation (WHO) has identified scrub typhus as a re-emerging disease in South-East Asia and the South-Western pacific region with a case fatality rate of up to 30 per cent in untreated cases and stressed the need for its surveillance.

"Scrub typhus has been reported from various parts of India and has recently been identified as one of the important neglected diseases of public health importance," says Dr Vivekanand Jha, Executive Director, George Institute for Global Health India. "While a large number of patients present to Indian hospitals with acute febrile illness and multisystem involvement including acute kidney injury, clinical manifestations do not allow distinction between different infections as the symptoms overlap.

Many of the cases remain undiagnosed and therefore are not treated resulting in high mortality. Importantly, if identified in time, it can be treated easily with cheap medicines that can be given orally."

From September 2011 to November 2012, blood samples of all patients with unexplained acute febrile illness and/or varying organ involvement, who presented to the Postgraduate Institute of Medical Education and Research, Chandigarh, were evaluated for evidence of scrub typhus using polymerase chain reaction, which detects the genetic material of the organism in patient blood. Out of 201 patients tested during this period, 49 tested positive. Kidney abnormalities were seen in 82 per cent patients with 53 per cent patients having acute kidney injury. Patients with acute kidney injury are sicker and more likely to die compared to those who do not have this.

"These are new findings of public health importance and suggest the need to include testing for this condition in the diagnostic armory of patients with acute febrile illness," says Dr Jha. The findings which have been reported in the open-source journal PLOS Neglected Tropical Diseases recently and are contrary to the widespread perception that scrub typhus rarely causes renal dysfunction. Non-availability of locally validated diagnostic tests further limit the reporting and testing of scrub typhus in hospitals across the country.

Scrub typhus is caused by rickettsia, a micro-organism different from bacteria. Mites first get infected by rickettsia and when they bite human beings, the disease gets transmitted. "The disease is not commonly recognized even by doctors. Since symptoms of the infection overlap with many other common infections, it is very difficult to differentiate without appropriate testing," says Dr Jha.

Testing for scrub typhus is not easily available in Indian hospitals as the diagnostic cut-offs for developed countries do not work here. "At PGI, we used a sophisticated technique called PCR and have shown that scrub typhus is more common than originally thought. We now need to develop the diagnostics needed to delineate the infection in common hospital settings," says Dr Jha. 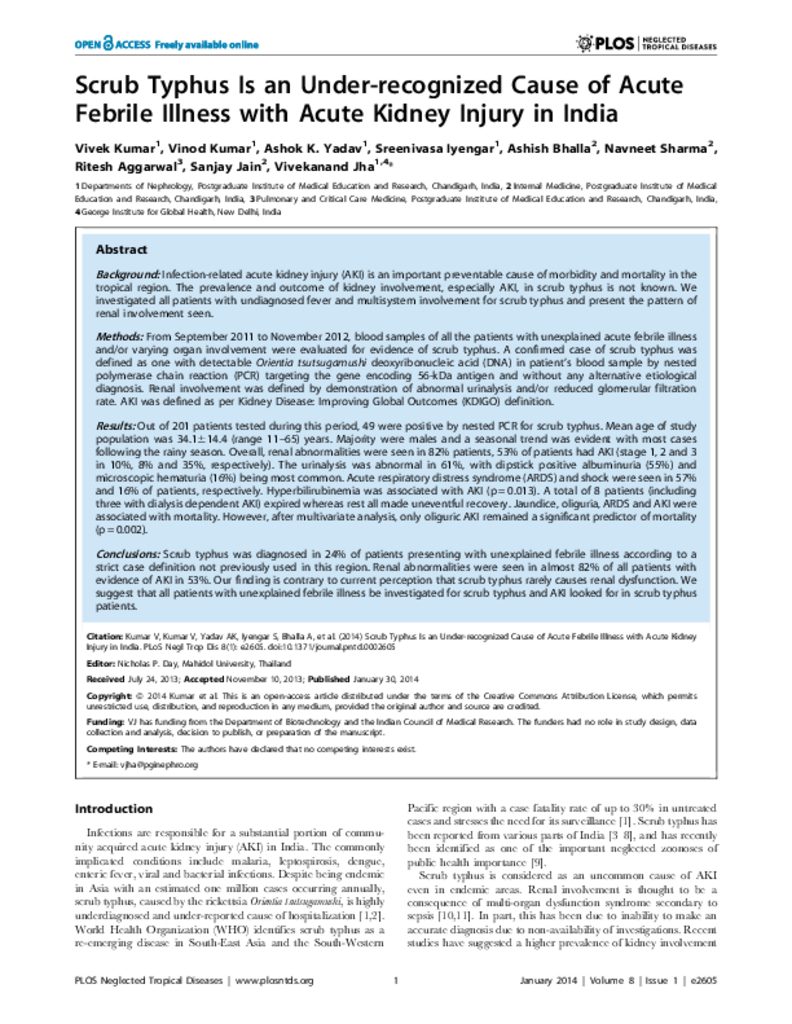