Today is World Health Day – the theme this year is Building a Fairer, Healthier World. The way things are right now, and with the situation in many countries of the world further confounded by additional waves of COVID, what steps can countries and communities take towards a fairer, healthier world? it is hard to see a clear path forward. This perhaps requires seeing the invisible.

One person who could see the invisible was Professor Bernard Lown,[1] He saw the potential in people, reposed his trust in them and took responsibility for nurturing them. He is the hand on the shoulder of hundreds of us scholars, medical students, fellows and public health researchers from at least 25 countries across the world. For those with the good fortune to have met him, he would look right into our eyes, asking incisive, difficult questions. And it was he who also said in his book, the Art of Healing that “ Few great books expose the human condition more clearly than a patient who has permitted one to look deeply into his or her eyes.”[2] 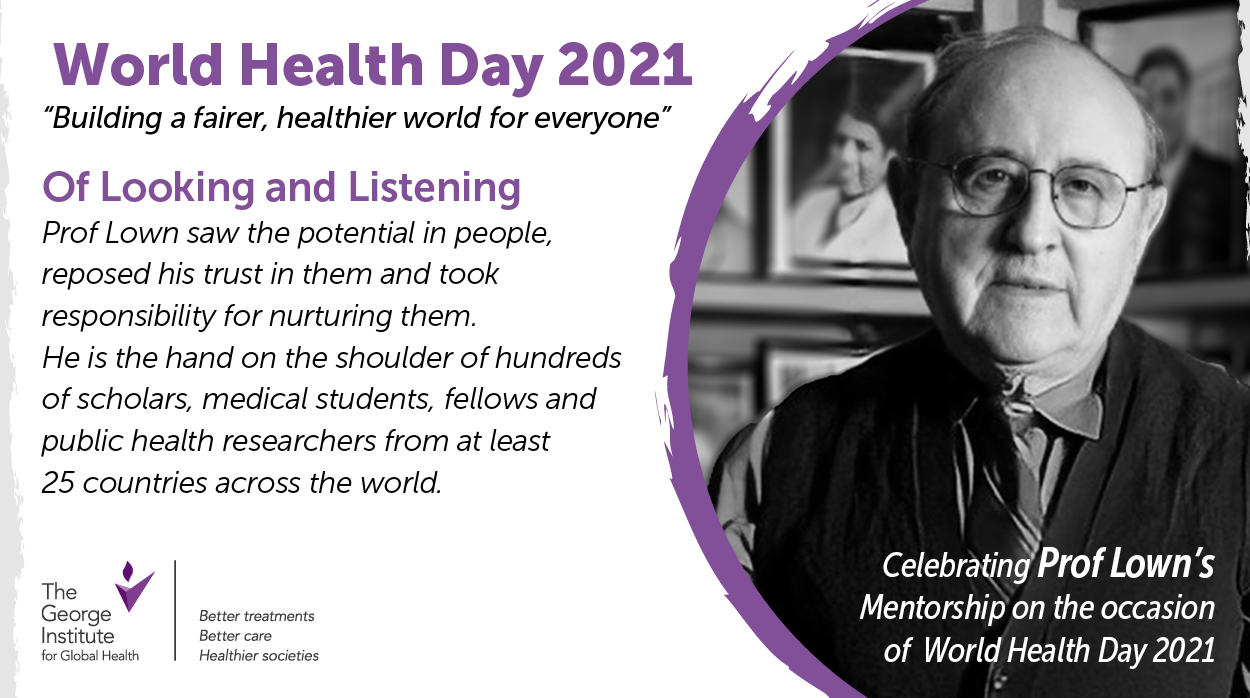 But are we looking into the eyes of people left behind?

Health systems across the world are often myopic to the realities of the people we are supposed to be serving. Many groups and communities are invisible to the system, hidden in averages and tallies of coverage. It is painstaking work to extend the line of sight of the health system to all populations. The burden of this falls disproportionately on members of India’s million-strong cadre of female frontline health workers or ASHAS. These workers are in effect the backbone of India’s health system now. The country’s Comprehensive Primary Health Care program places them at the heart of chronic disease control at the primary level, involving health promotion, motivation for screening and treatment support directly in communities. ASHAs are well known to the women in most areas, given their emphasis on family planning, maternal and child health.  But the new program targets all those over the age of 30 – so, older women, men, and other genders.

In a recent study supported by the Lown program, we found that as compared to women, men over the age of 30 less commonly reported knowing the ASHA in their areas. Further, fewer men than women reported blood pressure screening in the past year. Men enjoy greater freedoms and privileges in these parts of the country, so this exclusion is an important one to consider, as it eventually relates back to how frontline workers themselves are seen by communities (we have written about this here).

What support do frontline workers need to see and be seen in the communities they serve? Answering this question requires listening.

Prof Lown observed that “One must be an active listener to hear an unspoken problem.” Listening to ASHAs themselves, we learned that they have been frustrated, felt neglected by the system, their work underappreciated.  In India, the problems are not even unspoken: ASHAs have been agitating for their rights for some time now. Many promises made to them – regarding compensation, working conditions and more - remain unfulfilled. Frontline workers have a pivotal role in pandemic control as even our work concluded, but the toll of working on the COVID frontline has been heavy. (For a great example of listening, check out here a compendium of ASHAs perspectives during COVID by our Azim Premji colleagues, Arima and Sanjana).

We must be better at listening. Indeed, as Dr. Tanya – a collaborator and coordinator of the Health Equity Network India – has said, “The one thing that everyone has to do is to start listening, patiently, to what the other person is actually saying, and to start having dialogues, where you also don’t agree with each other, but you’re listening and respect each other….I think if we can do that one thing … there will always be hope.”

A fairer, healthier world requires taking our cue from great mentors so that we may look for unreached populations, and listen to our frontline workers and to those who are different from us.

Listen to more insights from our collaborators at the Health Equity Action Lab:

[1] Prof Lown was Professor at the Harvard School of Public Health, senior physician at the Brigham and Women’s Hospital in Boston, Massachusetts, USA, founder of the Lown Cardiovascular Centre (now Group), and Chairperson of the Lown Institute. Prof Lown founded Physicians for Social Responsibility at the height of the Cold War in 1960. Two decades on, with Dr. Yevgeny Chazov from the Soviet Union, he founded International Physicians for the Prevention of Nuclear War (IPPNW). This alliance is the recipient of the Nobel Peace Prize among many other major global accolades including the UNESCO Peace Prize, the Cardinal Medeiros Peace Award, and the Gandhi Peace Prize. Ever unpredictable, this 99 year old passed away this February, just a week before his centennial celebrations.

[2] Prof Lown credited his biggest lessons to his own mentor Prof. Samuel Levine, who was a keen observer. He wagered, based on his observations, that Mona Lisa had hyperthyroidism! The bright sparkling eyes, the thyroid goiter – Prof Lown himself could not be as certain when he chanced upon the masterpiece, but did concede that indeed, we must be open to seeing beyond the obvious.

One person who could see the invisible was Professor Bernard Lown, he saw the potential in people, reposed his trust in them and took responsibility for nurturing them.
- Devaki Nambiar