Uncovering the human face of drowning, the biggest killer of children in the Sundarbans, West Bengal

Like many other families in the Sundarbans, a remote, coastal region in West Bengal, Salima Gharami’s family lives close to a large pond in her village. A few years ago, she lost her 2-year-old daughter, Ruhina, to drowning.

Salima recalls what happened to her daughter that day vividly:

“Two of my children went to play. My older son left my younger daughter alone for a while. She somehow fell into the water. She was immediately pulled from the water and we tried many things to save her like calling a local doctor. The doctor gave her injections, gave her oxygen and tried to see if she was responding.”

Sadly, this is not an isolated instance of a child drowning in the Sundarbans!

Drowning is the biggest killer of children aged 1-9 years old in the Sundarbans – every day, 3 children drown 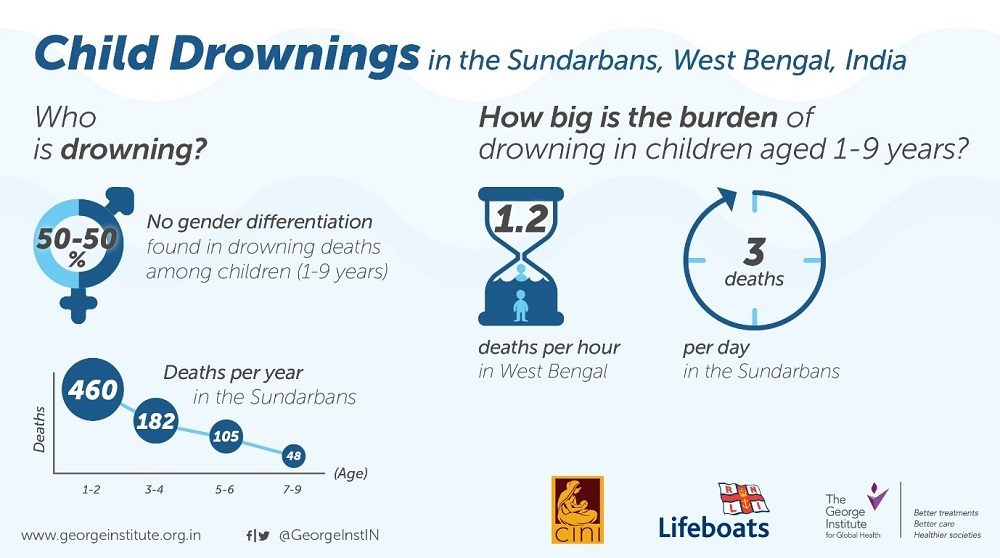 Children drown because there is no fencing or other protective barriers surrounding the ponds near their homes, common in this deltaic region. High levels of poverty mean parents are often working and are unable to provide appropriate supervision.

Superstitious beliefs abound in the area, and parents often call witch doctors to revive their children. As Salima says: “Even 4 to 5 witch doctors came to save her. But they could not revive her”.

The George Institute for Global Health, India along with the Child in Need Institute (CINI) conducted a survey in the Sundarbans to identify how many cases of  drowning were actually taking place as most deaths are not reported to hospitals or police. The survey found that 3 children like Ruhina aged 1-9 years old were drowning every day. More than half of these deaths were among one to two-year-old children, who are not able to swim or cry out for help.

Children most often fell in outdoor ponds within 50 metres of their homes and died. More deaths occurred in monsoon than, due to the high-water levels. Over half of the deaths happened between 10am and 2pm, when parents are usually busy with work. 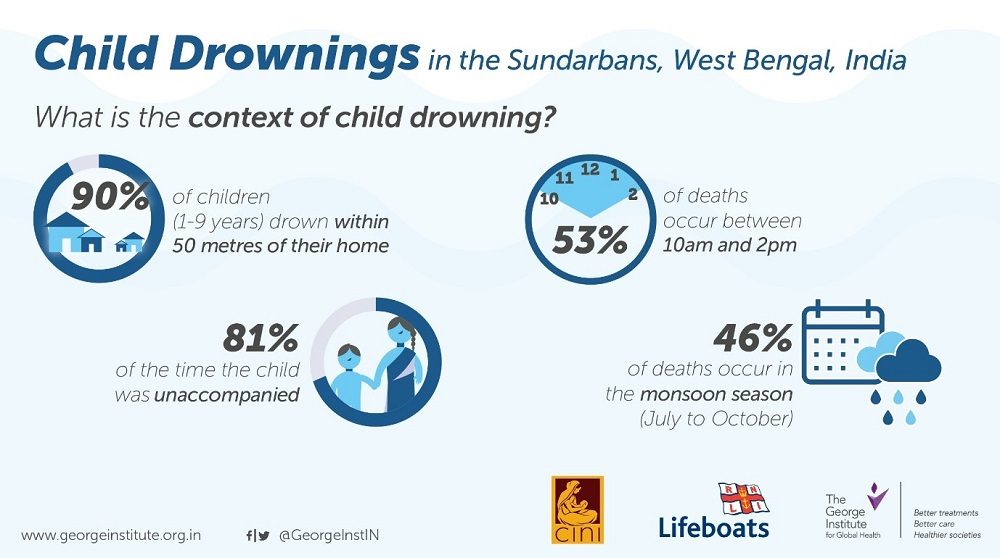 Each year, more than 320 000 people are estimated to die from drowning worldwide. The young, poor, and marginalised are among the worst affected. “Most of the world's drowning deaths occur in children, making drowning one of the leading causes of injury death for children and young people. Globally, drowning occurs most often in children between 1 and 4 years of age,” says Jagnoor Jagnoor, Head of the Injury Division at the George Institute India.

“Drowning is often referred to as a silent killer. It lacks the voice on global platforms of health and development and that is silencing evolving child health needs. Drowning deaths are appalling not just for the scale of suffering they represent, but also because they are, arguably, entirely preventable,” she adds.

Post-drowning responses were also problematic. The survey found that most children were spun over an adult’s head by a witch doctor instead of a certified doctor. Such methods stemmed merely out of superstition and blind trust in witch doctors present in the community, as well as distance from registered health services.

“Drowning can be prevented by ensuring children are safe from water, and by ensuring adults know proper rescue and resuscitation,” says Medhavi Gupta, a PhD researcher at The George Institute who was part of the survey.

Barriers such as door barriers, playpens and pond fencing can be used to reduce children’s access to water. Childcare services provided between 10am-2pm in an enclosed space can keep children safe together while their parents are busy. Older children can benefit from swim and rescue skills training, and adults in first response training.

As an ASHA worker from the area says: “If the government gives us training in First Response, we can conduct meetings with communities. Mothers will also be prepared to save their children from drowning.”

Please click here to watch a video on the burden of child drowning in the Sundarbans.