Cost and efficiency of the intensified Mission Indradhanush programme

India’s immunization programme, launched in 1985, is one of the largest health programmes of its kind in the world catering to a birth cohort of 26 million children annually. Despite being operational for over 30 years, only 65% children in India receive complete immunization during their first year of life. The Intensified Mission Indradhanush (IMI) programme was a strategic endeavor launched by the Ministry of Health & Family Welfare, Government of India in October 2017 aiming to achieve full immunization coverage in the country by 2018. It is obvious that a special drive like IMI requires additional resources, however, there is no information on the incremental cost of conducting IMI. This retrospective study was proposed to be carried out to estimate the additional resource requirement for IMI.

Aim:
To estimate the actual additional expenditures on Intensified Mission Indradhanush (IMI) programme by districts and sub-districts (blocks). The study will also estimate the economic (opportunity) cost of IMI which includes the monetary value of all incremental resources consumed in the delivery of IMI.

Specific Aims of the project include:

Five states have been selected, viz Assam, Bihar, Maharashtra, Rajasthan and Uttar Pradesh which have a high concentration of IMI activity. Total sample includes 35 districts, 94 blocks and 282 sub-centres of 5 states.

Research Methodology:
Data collected from financial records, administrative records at the sub-centre, block and district levels are being analysed.

Current Status:
Data collection has been completed for all 5 study states – total sample include

40 districts (including 6 urban areas); 91 blocks and 282 sub-centres. Data cleaning process is ongoing. Preliminary analysis is complete - three abstracts from the project were presented at the International health Economics Association (iHEA) conference in Basel in July 2019. 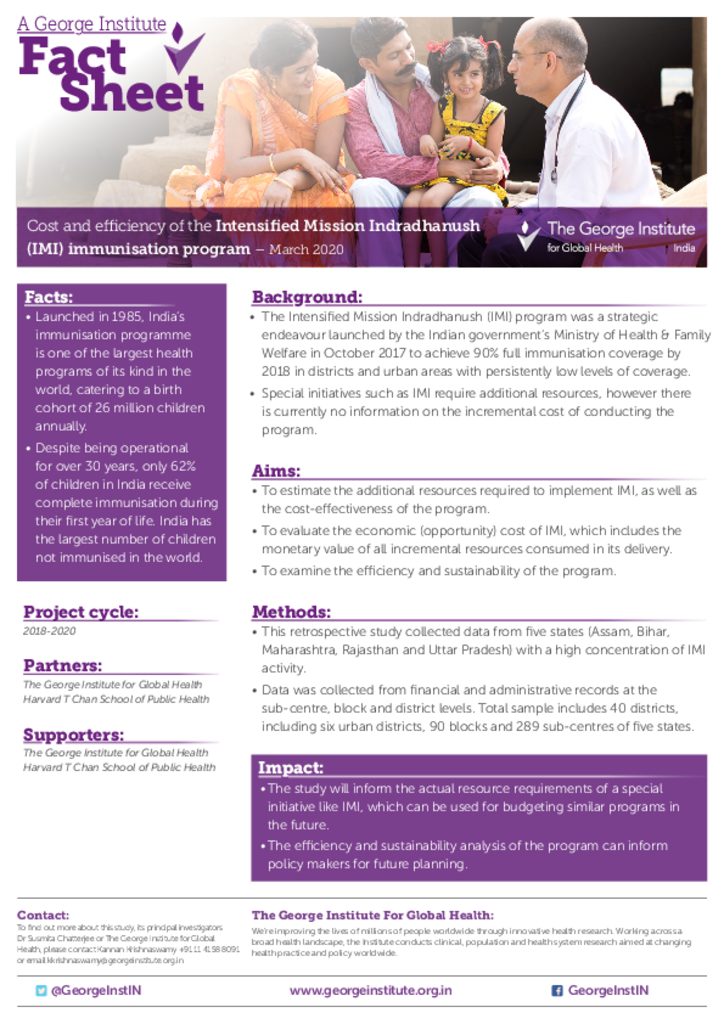