"This program has had significant impact in reducing stigma and increasing mental health knowledge."

India has too few mental health professionals to treat the large number of people suffering from mental disorders across the country. Out of every 100 people needing mental health care in India, only 25 receive it. In addition to the lack of trained professionals, there are further obstacles such as low awareness and a social stigma towards people with mental health issues. Rural areas are particularly disadvantaged in this regard due to the lack of trained health workers servicing those areas.

In 2013-14, The George Institute India received two awards – one from the Wellcome Trust/DBT India Alliance and another from Grand Challenges Canada – to conduct the SMART Mental health Project, aimed at bridging the treatment gap in rural India using mobile technology. We launched the project across two different sites: 30 smaller Scheduled Tribe villages, communities designated by the Indian Constitution as having unique qualities that designate them as belonging to ‘scheduled tribes,’ and another 12 larger non-Scheduled Tribe villages. Altogether, around 27,000 people took part in this study.

What did The George Institute do?

The key components of the study were a large anti-stigma campaign conducted across the 42 villages, followed by a unique mental health services delivery model using mobile technology specifically designed for use in rural areas with low resources. Also involved in the project were the World Health Organization (WHO) and the Institute of Psychiatry in King’s College, London.

Using a tablet device and a specially designed mobile app, rural health workers and volunteers visited the study participants and interviewed them using a screening questionnaire to identify common mental disorders such as depression and suicidal risk. The health workers inputted the answers into the app which then determined whether the person should be referred to a doctor. The doctors could then use the app-based WHO guidelines to provide the appropriate care.

The Principal Investigator of the project, Dr Pallab Maulik said: "This programme meant that health workers who were not trained in diagnosing mental health conditions were still able to screen and identify people at risk of depression, suicide and emotional stress, and refer them on for the proper care when needed. The follow-up of such people was also possible using a systematic algorithm based process." 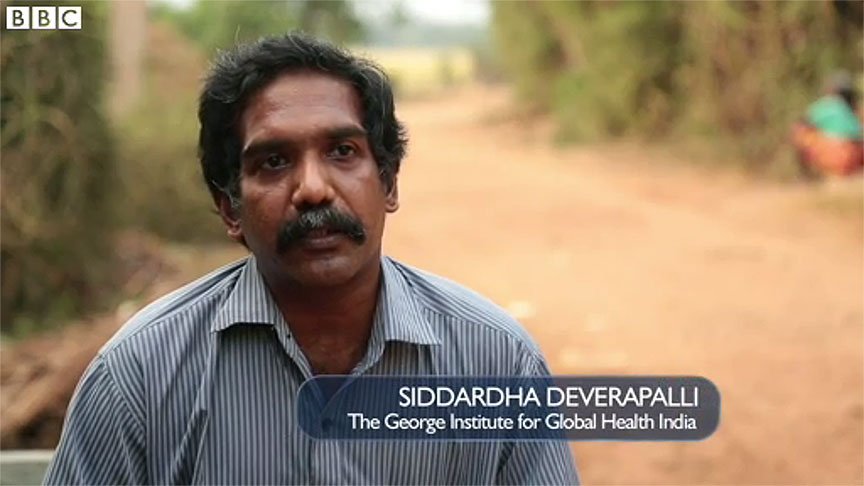 This study has received international media attention, including the BBC.

The George Institute screened 5167 people in the Scheduled Tribe area of the West Godavari district. The SMART Mental Health system found that around 5% of participants needed clinical intervention - almost none of the patients had been diagnosed or treated for their conditions in the past. Around 100 volunteers and village health workers were also now able to diagnose common mental disorder in these remote areas thanks to this project.

"This program has had significant impact in reducing stigma and increasing mental health knowledge. The uptake of mental health services in these areas went up by 1,500 times. Also, this addresses a number of objectives as outlined in the Mental Health Action Plan of World Health Organization and India's National Mental Health Programme and Policy," said Dr Maulik.

This study has received international media attention, with the BBC filming a segment on it in the state of Andhra Pradesh.

What does the future hold?

According to Dr Maulik, "the next phase of the trial will be to conduct a randomized controlled study to  gain more robust data which can be used to scale up the project to larger areas.

"These innovative methods of health service delivery hold great potential, especially in these rural areas, so we look forward to bringing the SMART Mental health project to more people."

Find out more about the SMART Mental health Project.